The third film in the "crazy alien" series, directed by ning hao, will be released nationwide on feb 5, 2019, the first day of the Chinese New Year.The film brings together three of the most bankable men of 2018, huang bo, shen teng and xu zheng. The three "male gods", who are incarnations of "gods", are about to stage a series of funny and funny stories.The film has been officially launched promotional activities, online news releases, weibo hot search, forwarding recommendation;Below the line, 120 led mobile trucks are ready to start the nationwide promotion tour. From the south of China to the north, across the warmest hainan to the coldest northeast, led mobile car bombing is coming. "the strongest comedy in the universe" -- crazy aliens will bring you the Spring Festival.Below, small make up for you to introduce the new sharp weapon of this publicity campaign mobile led display truck vehicle, it has what charm, let more and more media choose it as their new way of promotion.

Q:mobile led display truck vehicle's strong advantage?
A:1. Mobile: where there are more people, where to play and publicize, and where to go;
2, attract: wherever you go is a compelling beautiful scenery, unlike traditional advertising let people reject, it can instantly attract countless people's eyeballs;
3. Effect: the color is gorgeous and has a strong visual impact. The screen is huge and the publicity effect is strong.
4, innovation: advertising innovation, effective, advertising to the effect, no effect of the advertising is not cast, caravan is professional for customers to invest in advertising efficiency maximization service. 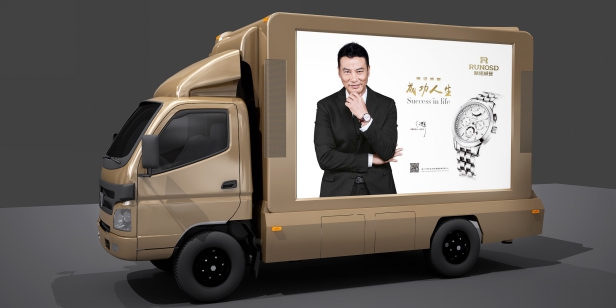 The open city roadshow, 50 small LED mobile vehicle from the north of Harbin in heilongjiang province have been covered most of the south - hainan haikou, from the cold northeast across to the warm south, the urban road hurrying pedestrians or sitting on the doorstep between villages and towns in the sunshine of the old man will see and hear us "the madness of aliens, bring a New Year greeting, smile still mention Spring Festival the whole family happy throughout the country.

No matter how cold it is, it can't stop the strong attack of "crazy alien"
Record "fifty cities road show activities" the second day of the led mobile truck publicity

Directed by ning hao, Huang Bo, Shen Teng, Xu Zheng movie starring "the madness of aliens, the national 50 city" road show "yesterday is a comprehensive large-scale activities open, 120 small JingChuan company van incarnation" earthy "who" mass no dead Angle lane with super hi film songs and the propaganda of super who, by the broad masses of feedback, they look for in a "crazy aliens films ultra-high, collected the 2018 film the most box-office appeal of the three men Huang Bo, Shen Teng, Xu Zheng, this will be what kind of fairy combination, ning hao director, this is to create the" comedy "the strongest!
The activity, the small van fleet will be taken from the has been covering the south to the north of China, and the weather at this time, cities have generally have entered the freezing cold state, especially the northeast area, the roadshow of Harbin, jilin, shenyang three cities, minimum temperature has been achieved - 19 degrees below zero, but it can never stand in the way our little caravan traveling, small van is still a lane to bring people from "the madness of aliens, the New Year blessing of the film, on the first day, the fairy combination show you hi turn over the Spring Festival!http://www.jcledtrailer.com/